Dr. Tanmoy Mukhopadhyay is one of the Top Radiation Therapy Specialist in Kolkata.

As a hopeful world looks for the miracle that will cure cancer once and for all, a major revolution in cancer treatment has been quietly taking place in radiation oncology.

The use of radiation for the treatment of cancer had its primitive beginnings at the turn of the nineteenth century and not long after the discovery of X-rays in 1895 by the German physicist Wilhelm Roentgen.

In 1898, a polish immigrant working in Paris named Marie Sklodowska (together with her husband Pierre Currie) isolated the first known radioactive elements which she named Polonium (after her homeland of Poland) and Radium. 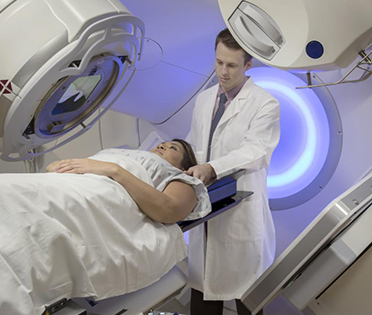 Emil Grubbe was the first person to use X-rays to treat a patient with breast cancer.

Despite their promise, an important limitation of the early X-ray machines was their inability to produce high energy deeply penetrating beams. It was thus difficult to treat deep seated tumours (for example tumour within pelvis) without excessive skin reaction.

Many radiation oncologists thus relied instead on the placement of radioactive sources in close proximity or even within the tumour, a technique known as brachytherapy. In many tumour, for example cervical cancer, brachytherapy became the main treatment ( as it so remains to this day).

An exciting development was the introduction of high energy (megavoltage) treatment machines known as linear accelerators or linacs. Such machines were capable of producing high energy beams allowing for the very first time treatment of tumours deep inside the body. The first patient treated at Stanford University using this machine was a child with retinoblastoma (a cancer of Eye). Treatment was highly successful and the patient remained free of disease with good vision more than forty years after treatment.

Radiation can destroy all tissues both normal and tumour tissue. The goal of radiotherapy is to maximize tumour kill and minimize normal tissue toxicity and preserve its function. It is a balance between these two factors. With conventional radiation therapy, X-ray pictures are taken and treatment areas are drawn on X-ray films. A large safety margin is given around the targeted area. But, internal anatomy is not well correlated with the external marking. Hence, there is always risk of missing tumour and also damaging the normal tissue. New developments on computer technology led to an enormous evolution of radiotherapy techniques.

When using conventional radiotherapy the intensity of beams throughout the radiation field is constant. The new technique called ‘ intensity modulated radiation therapy’ allows modulation of beam intensity within the treatment field to obtain highly precise dose delivery and reduce dose to normal tissues. If the surrounding dose to normal structures can be limited it has two major benefits. The first is that lesser dose to normal organs will cause lesser side effects. The second is that it allows increased dose to be delivered to the tumour which in turn translates to better tumour control and survival.

Linear accelerators were equipped with various imaging modalities that allow acquiring high quality CT scans of the patient on the treatment table to locate the position of tumour before delivering radiation dose. During a course of radiation treatment, the size and shape of a cancer tumour can change from one day to the next. The tumour location can also change as a patient breathes during treatment. Image Guided Radiation Therapy (IGRT) enables us to correct patient’s position or the radiation beams and thereby compensates for these changes.

Radiosurgery is a radiation delivery procedure that precisely delivers large radiation doses to tumours and other relevant anatomical targets in a single session or in a small fraction of sessions (typically upto five).  Modern machines (e.g.,Novalis Tx) can deliver this treatment at submillimeter accuracy.The goal of this non-invasive procedure is to destroy or make tumour inactive without harming nearby healthy tissues and without involving traditional surgery. This technique has drastically reduced the number of visits necessary for treatment. Patients can go back to normal life quicker than before.

Historically, radiosurgery began by treating targets in the brain and has now extended to targets in other organs like lung, liver, pancreas etc. This strategy can be more effective at killing or controlling certain types of cancer.

With the development of radiotherapy techniques, problematic disease sites, untreatable or restricted to inadequate treatment can now be routinely treated with radiation with minimal risk of causing harm. We can now cure more cancers with fewer complications than ever before.

Current developments  in radiation therapy are commendable. If used judiciously this already established modality will gain even greater importance in days and years to come.